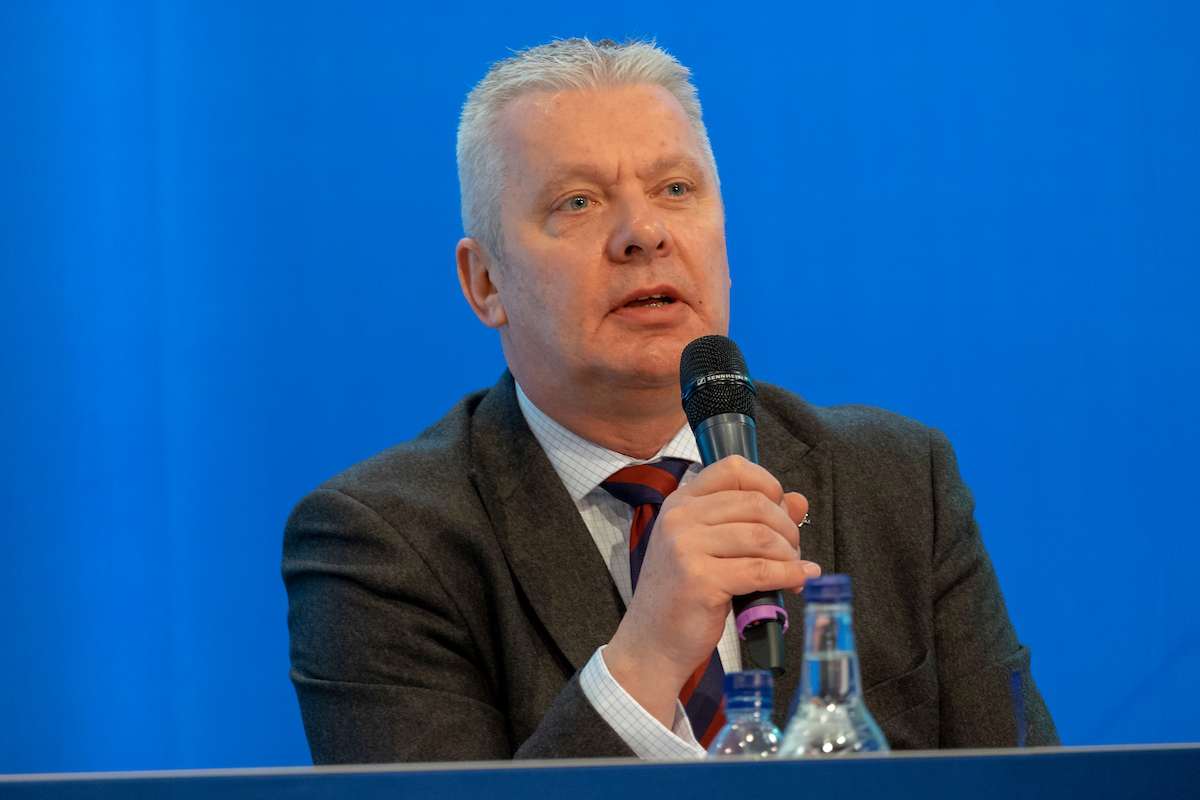 
Colleagues, here is the blog for May 2019; finally winter is behind us and spring is here, allegedly we should feel healthier, brighter and we should have a spring in our step! Well let's hope that's the case for many.

I want to begin by mentioning the inquest into the London Bridge terrorist attack, which is now well underway at the Old Bailey. I am mindful of passing comment while the inquest is ongoing, but I would like to say that all those affected, including those who lost their lives, are in our thoughts and prayers.

I can't imagine how difficult it must be to revisit the horrendous events of 3 June 2017. Much has been said about the bravery of people on that night and those same people are now providing evidence to the coroner under the extreme scrutiny of the world's media. If you look up the words bravery, courage and self-sacrifice in the dictionary the descriptions are synonymous with the actions of those present. We know BTP Officers Wayne Marques GM and Leon McLeod QGM have given evidence and we wish them well, as we do with all police officers, emergency workers and members of the public attending the inquest.

This month we also remembered those affected by and involved in the terrorist atrocity at Manchester Arena. The 22 people who lost their lives and the hundreds who were injured during this horrific attack have been in our thoughts, along with our colleagues who responded to the incident and witnessed the devastation.

This brings me on to the critical issue of officer and staff welfare. During the recent mental health awareness week, I spoke about period in my life which, both personally and professionally, was very difficult. You can listen here.

I'm not the only police officer to have felt like this and I know many officers, including colleagues in BTP have, and continue to, struggle. We hear the term 'postcode lottery' used to describe differences in NHS treatment available, but recent conversations I have had confirm to me there is also a postcode lottery when it comes to mental health support within the police service.

I'm not going to recount the specific conversations I have had over the last couple of weeks but I want those individuals, and our wider membership, to know I am again, as a matter of priority, speaking to members of the Chief Officer group to determine how we can improve the level of support and guidance given to officers who find themselves in crisis.

It is a complex issue of cause and effect, and what one person finds helpful will not suit another. However, we must do better to support our people. I will of course keep you updated on these conversations.

Moving on to recent issues in-force, some will be aware that BTP has reported a cyber-security threat to the newsroom section its website. An investigation is being conducted by the NCA and the Information Commissioners Office has been informed. We have been assured no details of Police Officers have been obtained, lost or leaked.

It is currently reported that the hackers obtained a small number of email addresses and telephone numbers belonging to corporate communication employees. The investigation is ongoing, and we will keep you updated with information we receive.

You may recall that last month I wrote about the suggestion TFL had given notice to BTP to cease funding 160 officers in London. I have since received an update from the Interim Chief Executive of the BTPA Mr Ian Pigden-Bennett. He informs me that on 29 January 2019 TFL gave notice to terminate an Enhanced Policing Service Agreement, which currently funds 160 resources at locations across B Division as it was assessed that these officers were undertaking core-policing activities.

BTPA have asked BTP to undertake an assessment to clarify the resources required to deliver core services and expect to receive the initial findings this summer. I am told the findings will be independently verified and assessed by the authority and the initial recommendations will be shared with us, along with any implications for the core budget.

Once I have that update, I will share it with you, but it has been confirmed to me that there will be no planned redundancies. That said, this statement does not cover the reduction of numbers through natural wastage. I am sorry for those on TFL or working on core policing in London that I can't provide more information just yet, but we will monitor the progress being made.

Talking of uncertainty, the Force must find £30 million of efficiencies before 2021 and part of that may come from a proposal to introduce a single control room. You should all now have received a bulletin updating you on the future contact, command and control project.

This is the first newsletter regarding this particular project and some of you maybe shocked at the prospect of a single control room. Well be reassured, this Federation does not support this, and ours is a position shared by TSSA.

Personally, I don't see this investment and it appears to me that this is just another money-saving exercise. Again, we see that consultants are involved in this project and are looking at the demand on our control room. Does this ring a bell? Did we learn nothing from the Demand Review?

We see repeated and fundamental changes being made in BTP. Year after year, change after change. When will we experience continuity? When will managers and leaders stop interfering with policing and allow officers to simply do their job? I am astounded that after repeated commentary about the Force being over exposed to change, we seek to introduce more change. No matter how good the technology is, how competent the operator is, a single control room based in London spells trouble.

I know some will say 'here we go again, the Federation giving a negative spin on BTP plans,' but I wouldn't be doing my job if I didn't raise these concerns. We are the voice of our members and it is our members who work the front line, day after day. These are the individuals who will know from first-hand experience the potential flaws of a single control room. It isn't a consultant, a chief officer, a member of COG or indeed the Chairman of the Federation who knows best.

Frontline, operational cops and members of staff who currently work in the FCRL, FCC and FCRB know what they are talking about and I question whether they are being listened to. TSSA has produced a paper on this topic and so far the advice and feedback has been ignored. Experienced staff in all three locations are already leaving BTP in fear of what the future holds.

So what? We can recruit more people with no experience or understanding of the environment or geographic area we police. Anyone suggesting that a single control room in London, will lead to improved call handling and response time, and will deliver effeciencies is living in la la land.

You simply cannot deliver more with less and we are not learning from the experience of others. Cleveland Police is a prime example; they are bringing 999 call handlers back in-house after ending a private contract early. Their ACC recognises that their control room is at the heart of their daily interactions with the public and the lynchpin in terms of communicating with the public and other stakeholders.

As more information is shared with the Federation, we can work with BTP to improve on the service delivery, but we will not currently endorse a single control room proposal.

On more of a positive note, anyone attending Northwick Park for training will find improvements to the facilities; new TVs, iron and ironing board and tea-making facilities in each room. These little creature comforts should make life at Northwick Park more bearable. It's not The Ritz - it's not designed to be - but the Force has listened to your concerns and invested in improving the standards of this accommodation.

The Chief Constable informs me that once the changes are fully introduced, he will pay a further visit to see the impact and will hopefully receive a better reception. Certain officers from our Superintendent ranks have already visited and stayed the week, so it must be better. Nevertheless, if these standards do slip and your experience of Northwick Park isn't a pleasant one then please don't hesitate to inform the Force or us.

The Force is conducting a procurement process looking at new items of uniform, especially trousers and jackets to replace the lovely fleece. I appreciate some may find it difficult to give up the 'comfort' of the fleece, but you will hopefully receive the new jackets before autumn. Other uniform items are being considered as part of a scoping exercise and over the next 6 months we should be seeing new items of kit being issued.

The Chief Constable also informs me that a new tattoo policy will be issued shortly. This will also allow officers with tattoos to wear short sleeve shirts. With the finer weather arriving this will be good news for many. Obviously, there are certain restrictions regarding tattoos that could potentially cause offence, but in the main the new policy is a welcome decision.

There have been many changes within the Authority, and I hope these changes will finally bring some continuity and consistency. BTPA is your (and our) employer, so it is crucial this Federation has a positive working relationship with the Board and staff. We will welcome both the new CEO and Board members and hope to maintain open and productive conversations with the Authority.

A two-day Misconduct and Performance seminar took place this month in Stratford for all Federations, including BTP. Two of our finest reps, Mark Bishop and Debi Rouse took part and found it valuable. Keep your eyes peeled for a blog from Deputy Chair Debi, who will report on the seminar and any potential changes on the horizon.

I will finish by thanking all of you in BTP for your continued excellence and professionalism in policing the railways and keeping the public safe.

"If you can't change it, change the way you think about it."