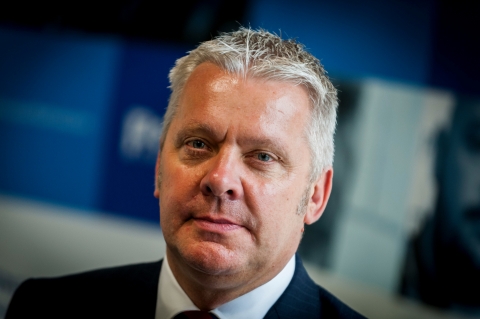 
Colleagues, it is with sadness that I begin this month's blog with news of the death of PC Daniel Young from B Division. Although I never met him, Daniel was clearly a very popular character and the messages of condolence have been moving to read. It's never easy when you hear of such news, especially when someone is so young in age and service. I know there are many in B Division who will miss Daniel immensely and our thoughts and prayers are with his family, friends and colleagues during this time of mourning. Rest in peace, young man.

If you are a colleague who knew Daniel or worked with him recently and his passing is causing you concern, then please don't hesitate to inform your supervisor or make contact with BTP Assist or a TRIM practitioner. Support is there if you need it.

Let's Talk
This month the force launched its 'Let's Talk' campaign and further details can be found on the intranet. As a Federation we're supportive of the campaign; most of us treat our colleagues with dignity, respect and kindness but where that's not the case it's incumbent on all of us to call out poor behaviour. We hope the campaign will also demonstrate that reports of inappropriate behaviour are taken seriously in our force, thereby giving colleagues the confidence to speak up when something's not right.

If you do experience or witness anything that doesn't feel right, you have a range of options available, from sorting things out informally face-to-face, to talking with a specially trained team member. As police officers, you face all sorts of inappropriate behaviour out on your beat/patrol. It's not acceptable then, nor is it acceptable in the workplace.

Scotland update
We have shared an update from the Scottish Parliament on the devolution of railway policing in Scotland. Additionally the Cabinet Secretary for Justice, Humza Yousaf MSP, has written to the Scottish Justice Committee to provide an update. As you will read, the BTPA and SPA are working hard to develop the Scottish Railways Policing Committee, a sub-committee of BTPA. This hopefully addresses the concerns of accountability but additionally compliments and enhances the excellent close working relationship that BTP has with Police Scotland.

This proposal will need time to be bedded in and will face rigorous scrutiny and numerous reviews to ensure it meets the principles of devolution. I have no doubt this option will work, nonetheless in the current political climate I expect there will be certain MSP's waiting for an opportunity to re-introduce the proposal to integrate BTP in to Police Scotland.

It is therefore imperative for BTP/A to invest in developing BTP Scotland and showing critics that BTP and Police Scotland can continue to work successfully together without major disruption and without major changes. Those officers on the frontline in both forces continue to deliver an excellent service to the public and the train operating companies and it's time for both authorities to invest, develop and support railway policing in Scotland.

Colleague convicted of common assault
You may have read this month that one of our officers, PC Andrew Spiby was convicted at Birmingham Magistrates court following a two-day trial. He was found guilty of common assault having deployed his Taser in the line of duty. There is now an appeal lodged with the Crown Court so I cannot go into any detail that potentially could impact on those proceedings.

I do want to speak more broadly about the worrying implications for police officers across the country who use the personal protective equipment that they are issued with and trained to use.

You all have very difficult roles when faced with confrontation, violence or threats of violence and on many occasions it's a split-second decision that saves lives and prevents serious injuries (ask Wayne Marques GM). This case shows that officers can and will face criminal prosecution, and their decision-making will be scrutinised and analysed from an armchair, especially by the IOPC.

Scrutiny of policing is important but it's the manner in which that is done currently that concerns us. There is no reenactment of the events and the decision maker is not placed into a threatening environment where their safety or the safety of others is at risk. Instead they make a judgment on what is written and seen from very safe surroundings.

As I said last month, there's a marked difference between doing your job to the best of your ability with the honestly held belief that you are making the right decision in using PPE to protect others and yourself or to execute an arrest, and being completely out of control intending to cause physical injury to others. The environment you work in is a dangerous one and on occasion evasive action is needed.

PC Andrew Spiby can be reassured that he has the full support of this Federation and we will be challenging his conviction.

Learning from PFNI's approach to wellbeing
This month Mark Marshallsay (Treasurer) and I had the privilege of joining all national Federation representatives at the Police Federation of Northern Ireland (PFNI) conference. It was a fantastic event and a great opportunity to speak with fellow chairs sharing their experiences and concerns.

At the forefront of the discussions was mental health and wellbeing in the Police Service. The impact of trauma on officers is an ever-increasing issue for all forces including BTP. The PFNI presented their wellbeing project, 'Your Health, Our Priority' which is in its second year and has had a big impact in addressing health and mental wellbeing.

Something I took away from this conference was the proactive, rather than reactive, approach. PFNI/PSNI do not wait for officers to report sick or report problems; they proactively assist them in healthy eating, setting exercise regimes including yoga, using complimentary therapies, and offering support and advice at an early stage.

The evaluation conducted by the independent advisors show that helping and assisting officers in addressing the basics in advance and being more proactive in education and support is having a positive impact. There's buy-in from police officers and an increase in attendance. Clearly this is a model that works and one I hope BTP will explore and consider for the future.

[If you're interested in the impact small lifestyle changes can make, this article may be of interest. There's no denying policing requires long hours but there's a growing body of evidence that the harmful effects of shiftwork can be reduced.]

Pay and conditions was also discussed at the conference. We're waiting for a decision from the independent pay review body as to their recommendations on this year's pay award. There then follows the wait to see the Government decides to ignore the recommendation - as they have for the last three years - and award an increase which contradicts the advice they have been given.

Policing and politics
We await news of the next Prime Minister and will watch with interest their approach to policing (and funding the service). All politicians seriously need to acknowledge that policing is not currently in a great place. Austerity has gripped us all and caused some major challenges. Violent crime is on the increase wherever you live; knife crime and violent crime isn't solely a London problem it's a national problem and young lives are being destroyed. At present the police service has neither the funding nor the skills and equipment required deal with this crisis alone.

Key meetings
The newly appointed Chief Executive of the BTP Authority, Mr Hugh Ind, has now begun work. We were due to meet with him earlier in the month but that had to be rescheduled to 25 June. It's good to have the opportunity of a conversation so soon after his appointment and there's plenty to talk about given the challenges facing the police service. Hopefully an update will follow next month.

On the same day as we meet the CEO, we will attend a meeting with those tasked with looking at the proposal of a single control room.

If you are a regular reader of this blog, you will know my views on this and that this Federation will challenge the proposal. Last month I reported that the team responsible for delivery had received, and were ignoring, a report from representatives of TSSA. I am informed that my blog was factually incorrect and that the report was not written by a TSSA rep. In the spirit of transparency and accountability I apologise if I have misled you in respect of the author of the report. For clarity, the fact remains that a report has been written and is being ignored by certain members of COG.

The force does need to find huge efficiencies and at this meeting we anticipate receiving detailed update on the proposal of a single control room and any progress made to explore alternative options to improve the technology and the service delivery. As stated previously, in my experience more for less never works but being open minded I will welcome any other proposal that can achieve the aims. So again, look out for next month's blog where hopefully I can provide you with more detail.

Charity news
On a softer note I would like to thank PC Leon McLeod QGM for running the London Marathon this year and raising much needed funds for PTSD999. This is a great cause and one close to Leon's heart. Once again Leon has focused his thoughts and efforts to assist and help others, which is both admirable and inspirational. Leon, we are so proud of you, keep up the excellent work.

Leon's fundraising page closes at the end of this week so there's still time to show your support.

After a long wait we have seen the introduction this month of the Railway Dogs Benevolent Fund which will help to pay for ongoing medical care for retired BTP Police dogs. When police dogs retire, all costs relating to their health and welfare become the responsibility of the owner, usually the handler who takes the dog on as a family pet. As anyone who has a pet will know, vet bills can be extremely costly, and it is difficult to obtain adequate pet insurance cover for retired police dogs because of injuries or ailments sustained at work and conditions related to the dangerous nature of policing.

I would like to thank DCC Hanstock and ambassador Debbie Arnold for supporting this great charity and also thank all the volunteers involved in getting the charity to this point, including our own PR advisor Gemma Pettman. Well done all.

Thank you again for reading this month's blog, I hope it is informative and if you have any questions or concerns please do not hesitate to contact your local representatives.