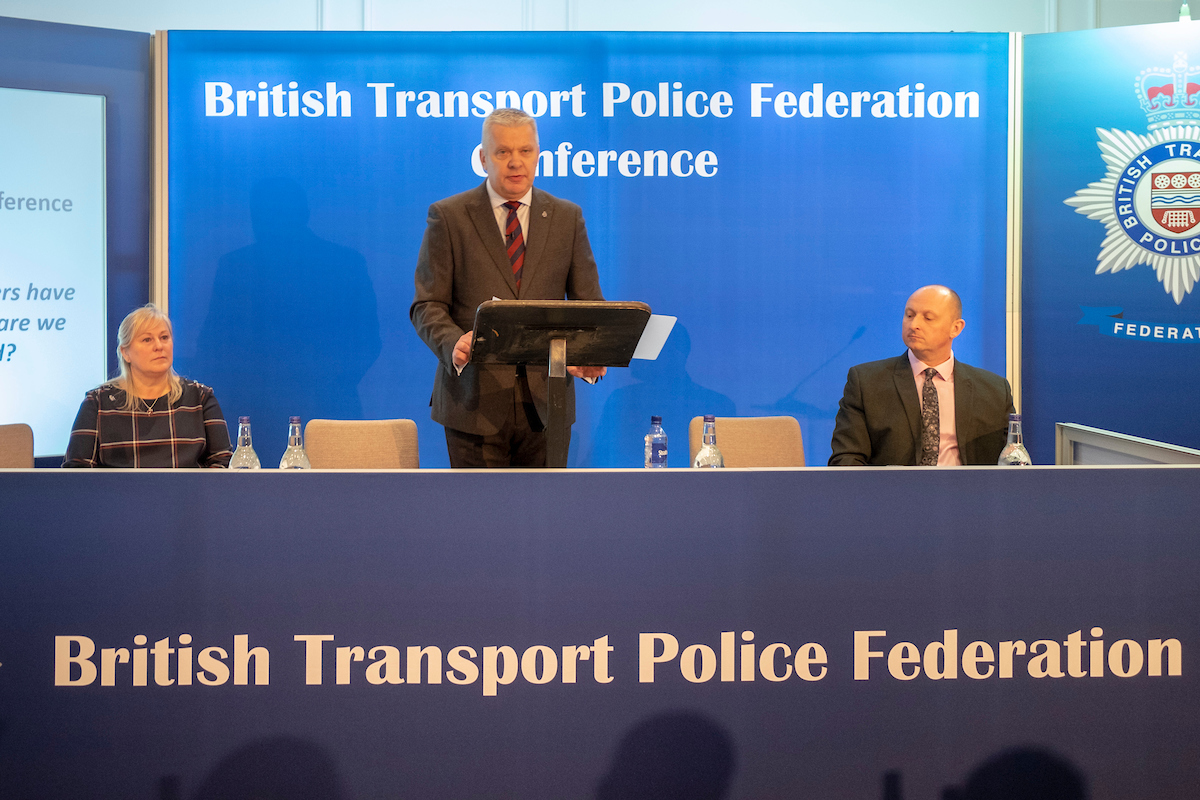 Information from our Annual Federation Conference.

British Transport Police Federation's annual conference was held at The Grand in York on 21 and 22 September. The Awards of Excellence and centenary celebration took place on 22 September at the National Railway Museum in York.

Federation Reps also debated a number of rule changes and motions. Reports from each Divisional Secretary can be found in the conference brochure. A summary of conference will be emailed to members shortly.

Guest speaker
Colin Reynolds of Reynolds Dawson (above right) gave Federation Reps a detailed and input on the new conduct regulations and post-incident procedures. Detailed training on the new regulations is being organised for reps but Colin focused on the most significant changes for the Federation to be aware of.

Conference - open session
Chair's Speech
Federation Chair, Nigel Goodband, delivered his keynote speech to an audience of Federation Reps, BTP leadership, members of BTP Authority and guests from across the police service. Nigel paid testament to members for their dedication through one of the most challenging periods faced by the service:

"It was essential that vital services were kept open and the country was kept moving and without the dedication of BTP officers, this would not have been possible. Thank you. These same officers continued to work and deal with the public and keep their communities safe, despite being unvaccinated. They worked despite knowing that they could personally contract the virus, but also in the fear that they could take it back home to their loved ones. For that we owe them a massive debt of gratitude.

"I would also like to thank our colleagues in the Special Constabulary. 302 officers who clocked up over 100,000 hours of service in 2020, unpaid and often un-thanked. They stood shoulder to shoulder with regular officers and delivered outstanding service to the public in such difficult circumstances.

"Thank you to each and every one of them - we are proud to represent you all."

The theme of the Chair's speech was 'Forward'. Nigel Goodband spoke of the challenges facing policing and the Federation and signalled his commitment both to working with the Force to tackle these and further strengthening the Federation, so it is fit for the next hundred years (2021 marks one hundred years since the Federation was established).

Minister's response
A three line whip in the House of Commons meant the Rail Minster, Chris Heaton-Harris MP, was unable to attend the Federation conference in person. He recorded a response to Nigel Goodband's speech and answered questions that had been posed by Federation Reps. Above all, he offered a message of thanks:

"I want to thank you all for your dedication and outstanding contribution to the safety and security of the people who use or work on our rail system. Your exceptional efforts meant key workers could do their jobs throughout the pandemic and keep the country running through the most challenging times we've seen in generations. Your commitment in such adverse conditions is unparalleled and your unique skills in keeping passengers safe while keeping the network moving is key to our recovery from the pandemic. You should be extremely proud, and I really do want to say thank you from me and Grant [Shapps MP}, the Secretary of State."

Please follow this link to view the Minister's response

The discussion lasted for more than an hour and a summary of the questions and answers is available here.

Awards of Excellence and centenary celebrations
BTP Federation's Awards of Excellence were held on the evening of Wednesday 22 September at the National Railway Museum in York. Officers who had saved lives, tackled terrorists and kept the public safe received awards, having been nominated by their colleagues and peers.

The winners:
Videos highlighting the officers' work are available to watch on our Facebook page.

Centenary celebrations
The evening ended with a reflection on 100 years of BTP Federation. With the help of the BTP History Group, a brochure has been produced which charts the organisation's history. Phil White and Glyn Thomas from the History Group are pictured below with Nigel Goodband. The Federation has also adopted a new logo.

The annual British Transport Police Federation Conference and Awards of Excellence were due to be held in Cardiff on 17 and 18 March. Sadly, the impact of the coronavirus pandemic meant the events were postponed.

The annual British Transport Police Federation Conference was held at the Holiday Inn, Manchester on 13 and 14 March 2018.

The annual British Transport Police Federation Conference took place at the Hilton Hotel in Cardiff on 21 and 22 March 2017.