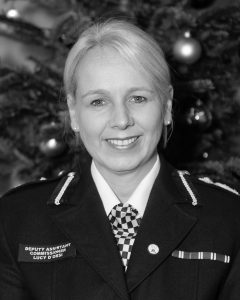 
Lucy D'Orsi has been announced as the next Chief Constable of British Transport Police.

Lucy is currently Deputy Assistant Commissioner for Specialist Operations at the Metropolitan Police Service (MPS). She has extensive experience working across multiple London boroughs and is currently Counter Terrorism Policing's Senior National Coordinator for Protective Security and Preparedness. She works closely with UK businesses, UK military and international law enforcement agencies, is a gold public order commander and has led the policing of multiple events.

Lucy D'Orsi will take over from Chief Constable Paul Crowther when he retires in February following a forty-year policing career with BTP.

Lucy said: "I am delighted and honoured to be appointed as the next Chief Constable of BTP. I am looking forward to building on the legacy that Paul is handing over and I would like to thank him for his dedication to policing. Whilst policing the Nation's capital has given me a wealth of operational experience, I am excited to lead a force that deals with the unique nature of policing Britain's rail, underground and tram network.

Working with industry partners and government to keep passengers safe, the railway moving and protect our critical national infrastructure, particularly during these uncertain times will be very rewarding. I very much look forward to working with the exceptional officers and staff of BTP, and the Police Authority. Finally, I would like to thank my family, friends and colleagues who have supported me throughout my policing career."

Chair of BTP Federation, Nigel Goodband, said: "We offer our warmest congratulations to Lucy D'Orsi. BTP has a crucial role to play in the fight against terrorism and she brings significant experience in this, and many other areas of policing that are relevant to a specialist national police force.

"We look forward to meeting with Ms D'Orsi at the earliest opportunity and establishing a constructive and productive relationship for the benefit of our officers and the communities they serve."