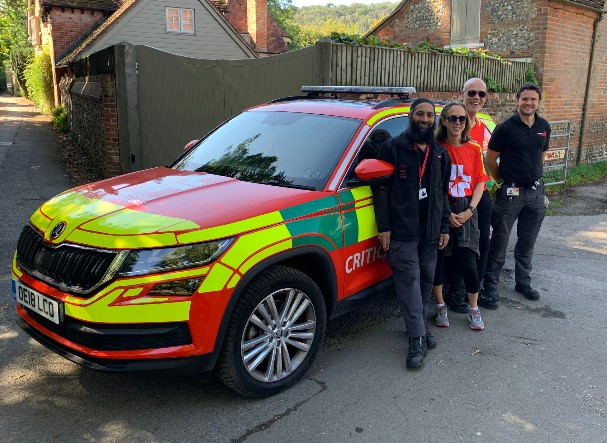 
Alvon May has completed his fundraising walk in aid of the Thames Valley Air Ambulance, but there is still time to top up his total, which currently stands at £1700.

Ten years ago, Alvon suffered life-changing injuries in an on-duty motorcycle crash. Doctors resuscitated him twice at the roadside before he was transported to hospital in the Air Ambulance. He went through a series of operations and spent eighteen months in a wheelchair before defying the odds and returning to work.

To mark a decade since the incident and his recovery, Alvon decided to walk the Thames Path. At 7am last Saturday (14 September) he and his wifeset off from Reading Bridge and walked 23.5 miles to RAF Benson in Oxfordshire, the home of the Air Ambulance. Their young son joined them for the final three miles.

Alvon said: "The walk was long, hard and hot. We had amazing support from friends and family during the walk and we were met and cheered on at various points along the route.We walked into RAF Benson in the company of around 30 people, which was a superb turn out.

"I have received amazing support from across the force and it has really touched me that in difficult times so many people have dipped into their pockets and donated to the cause. I thank each andevery one of you."

Alvon added that his supporters have 'probably saved a life' with the sum donated so far. If you would like to show your support and add to the total, visit Alvon's JustGiving page: https://www.justgiving.com/fundraising/alvon-may